Everything about the Honor 20 Lite Blue

Experts about the Honor 20 Lite Blue

Average scores of the Honor 20 Lite:

Description of the Honor 20 Lite Blue

Description of the HONOR 20 Lite Blue

Honor released the 20 Lite Phantom Blue as a successor to the Honor 10 model. You certainly won't see a big difference on the front of the device, but the back of the device now comes fitted with a third camera. The inside of the device also features some great changes.

There are many points that Honor decided not to change. That means this device features the same processor and battery as the Honor 10, which were great features in that device. This smartphone runs on Android 9.0 Pie with an added EMUI skin from the manufacturer.

This blue Honor 20 Lite comes fitted with a 6.21-inch display. This display has an elongated ratio, which makes it relatively narrow. On top of that, the display has a small notch at the top to make room for the front camera. The screen covers the front almost entirely thanks to this notch.

Cameras for all occasions

The front camera has a resolution of 32 megapixels and features several options to make you look even more beautiful in your selfies. When you turn the smartphone around, you can see that there are three cameras on the back of the device, which means an extra camera compared to the Honor 10 Lite.

The primary camera captures 24-megapixel pictures where every detail is captured perfectly. If you want to capture a bit more of a beautiful landscape or architecture in a single picture, you can use the 8-megapixel wide-angle camera. The third sensor measures depth and can be used when taking bokeh pictures.

The battery of the Honor 20 Lite Blue has a capacity of 3400mAh, which is the same as its predecessor. The Chinese manufacturer has opted for a microUSB port and not for a USB-C variant. This means that it takes about 2.5 hours to fully recharge this smartphone.

Processor for WhatsApp and Netflix

The processor in the Honor 20 Lite Phantom Blue is not the most powerful on the market, but it's sufficient for everyday apps. If you want to use the device for a fun game, WhatsApp, and Instagram, then the Kirin 710 processor is a great choice. On top of that, this chip is very energy-efficient, so your device can last even longer on a single battery charge.

This blue 20 Lite from Honor has more RAM and storage space than the Honor 10 Lite. This smartphone comes with 4GB of RAM, so you can multitask smoothly on this device. You'll also find 128GB of internal storage that you can use use to store films, music, or pictures.

This device has room for a microSD card, so you can easily expand the internal storage. If you don't need more storage space, you can place a second SIM card in the device. This way, you can keep business calls separate from your private calls while only carrying one device in your pocket.

The Honor 20 Lite Blue runs on Android 9.0 Pie, Google's well-known mobile operating system. However, Honor has added their own skin to the Android operating system. This means the icons have a unique appearance and some apps have been pre-installed on the device.

With normal use, we guarantee that your phone will work properly throughout the full warranty period. If something goes wrong, Gomibo.cz and Honor will make sure to help you out!

How do repairs at Honor work?

Accessories for the Honor 20 Lite Blue

Show all accessories for the Honor 20 Lite Blue

Accessories that go with the Honor 20 Lite Blue

Show all accessories for the Honor 20 Lite Blue 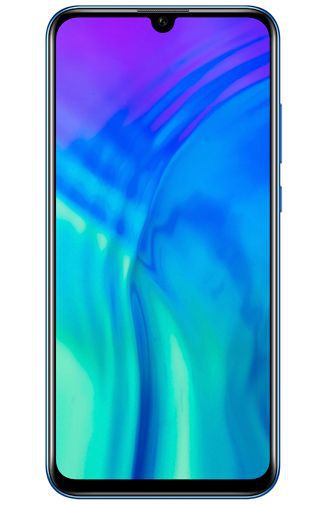