Everything about the Huawei P30 Pro 128GB Black

Description of the Huawei P30 Pro

The Huawei P30 Pro was presented at an event in Paris, which was held at the end of March 2019. The Chinese manufacturer presented this high-end device in different colours, including black, blue, twilight, and orange, also called Amber Sunrise.

The device has four cameras on the back, fast-charging technology, and a processor made by Huawei. The P30 Pro runs on Android with Huawei's own EMUI skin, is fitted with a fingerprint scanner that is integrated in the display, and supports fast charging via SuperCharge technology.

Three cameras and a depth sensor

Once again, Huawei has cooperated with the well-known manufacturer Leica in order to develop the perfect smartphone cameras and lenses. There are three cameras on the back of the device of 40, 20 and 8 megapixels. The primary camera shoots images with a lot of details, so everything you see is actually captured.

With the 20-megapixel sensor, you can shoot pictures at a wider angle, to capture landscapes or architecture for example. You can also bring objects up to 10x closer via Hybrid Zoom, which comes with the third 8-megapixel sensor. There's also a depth sensor that lets you take stunning portrait pictures.

This colourful Huawei P30 Pro is fitted with a screen that can display stunning colours. The Chinese manufacturer uses a 6.5-inch OLED display with a high resolution. Everything looks stunning, colours splash off the display, and black is truly black.

You won't find a physical fingerprint scanner on the Huawei P30 Pro, because it is incorporated under the glass screen on the front. This optical scanner ensures that you can access your device very quickly. This way, your personal files are kept safe and nobody else can access them.

The Huawei P30 Pro features a 4200mAh battery that will easily get you through a day of intensive use. It also comes with SuperCharge technology, which allows you to charge the P30 Pro with up to 40 watts. Wireless charging is also possible, although that's a bit slower.

Premium glass design on front and back

The design of this Huawei smartphone includes tempered glass on the front and back. The bezels are slightly rounded, as is the rest of the device, making it comfortable to hold. The top and bottom are slightly flattened, which is a nice design element.

The Kirin 980 processor is the beating heart of the Huawei P30 Pro, a chip that has already proven itself. Besides pure processing power, this chipset also delivers good battery optimisation performance. Artificial intelligence also plays a major role, so the device optimises all processes based on your use.

The Huawei P30 Pro is available with 128GB or 256GB storage space. This can easily be expanded with an NM memory card. This type of extra memory can be used in several smartphones, including this P30 Pro.

Out of the box, the Huawei P30 Pro runs on Android 9.0 Pie. The manufacturer has made several adjustments, including changes to the interface. There are also several applications installed on the device, but downloading more apps is easy and quick with the Play Store!

With normal use, we guarantee that your phone will work properly throughout the full warranty period. If something goes wrong, Gomibo.cz and Huawei will make sure to help you out!

How do repairs at Huawei work?

Show all accessories for the Huawei P30 Pro 128GB Black

Accessories that go with the Huawei P30 Pro 128GB Black

Show all accessories for the Huawei P30 Pro 128GB Black 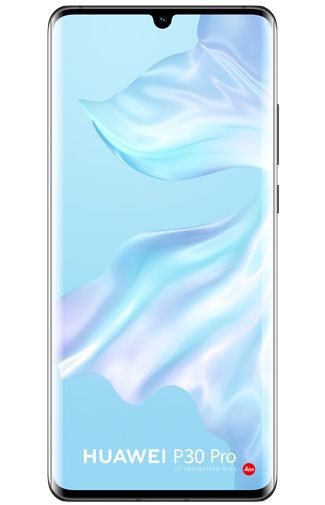