Everything about the LG Q7 Black

Average scores of the LG Q7:

Description of the LG Q7 Black

Description of the LG Q7 Black

In 2017, LG focused on minimal bezels, and 2018 is no exception to this trend. The LG Q7 is a lighter version of LG's flagship, the G7 ThinQ. With this light version, you'll still get access to a premium design but filled with mid-range specifications instead of high-end specs.

You'll still get access to a large display with minimal bezels. Under the hood, you'll find a mid-range MediaTek processor. This processor is powerful enough to handle most tasks without draining the battery! The Q7 also comes fitted with a single camera instead of a dual camera.

If you love watching films and series on your phone, the 5.5-inch display of the LG Q7 won't disappoint! The screen stands out thanks to its minimal bezels, which is a great added feature for this price range. Thanks to this set-up, the screen feels very large, but the device feels quite compact.

The display also produces great colours, a high maximum brightness and a Full HD resolution. This means that your content looks stunning and pin-sharp, even in bright sunlight.

While the LG G7 comes fitted with a dual camera on the back, the LG Q7 has a single camera on the back of the device. This sensor does not disappoint, as it is able to shoot bright, sharp pictures. On the front, you'll also find a camera, which lets you make video calls and take selfies.

Out of the box, the LG A7 runs on Android 8.1. This gives you access to the latest features and the Plat Store, where you can download more great apps and games! LG has added their own LG UX skin to this operating system, which adds a range of great features. It will also help you get the most out of the elongated display ratio.

Under the hood of the LG Q7, you'll find a good mid-range MediaTek processor by Qualcomm. This processor can handle everyday apps like WhatsApp, Netflix and Facebook. You'll even have enough computing power for games, and thanks to the energy-efficient chipset, you won't run out of power halfway though the day.

With normal use, we guarantee that your phone will work properly throughout the full warranty period. If something goes wrong, Gomibo.cz and LG will make sure to help you out!

How do repairs at LG work?

Accessories for the LG Q7 Black

Show all accessories for the LG Q7 Black

Accessories that go with the LG Q7 Black

Show all accessories for the LG Q7 Black 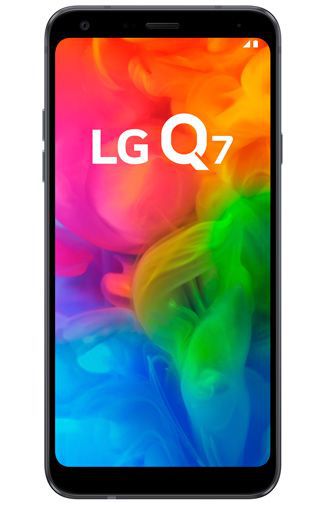