Order today
for delivery the day after tomorrow

Everything about the Samsung Galaxy A21s 128GB Black

In the spring of 2020, Samsung launched the Galaxy A21s, a budget smartphone with good value for your money. This makes it suitable for people who do not want to pay the highest price for a phone, but still want a nice phone.

On the back, for example, it has four cameras with which you can shoot great pictures. Besides that, the battery has a high capacity so that you can get through the whole day without having to charge in between. This phone is suitable for everyday tasks, such as internet, email, and social media.

A total of 5 camera lenses

In total this device has 5 cameras: four on the back and one on the front. On the back there is a wide-angle lens that allows you to capture wider subjects, such as landscapes and architecture. It also has a depth-of-field sensor, which adds a Live Focus effect.

This means that the background of your photo will be blurred, so you can take great portrait photos. Finally, you have a macro lens, which allows you to photograph objects up close. The front camera is incorporated in a notch at the top of the display.

The screen has 6.5 inches in size. This is on the large side, so this smartphone is suitable for people who are looking for a large display. The resolution is not particularly high, but the image is clear enough to watch your favourite Youtube videos or series on Netflix.

Do you have curious family members or friends? There's a fingerprint scanner on the back that secures your A21s, so only you can access your apps and files. It is also possible to use facial recognition, but that is less accurate.

Large battery for the whole day

The battery of this Samsung phone has a capacity of 5000mAh. This means that you have enough power to get through the day with a full battery, without having to charge in between. Charging is done via the supplied USB-C charger.

This smartphone is available with 32GB, 64GB and 128GB RAM. A small part of this is used by the software and a number of pre-installed apps. If this is not enough for you, use a microSD memory card to expand the storage space.

Show all accessories for the Samsung Galaxy A21s 128GB Black

Accessories that go with the Samsung Galaxy A21s 128GB Black

Show all accessories for the Samsung Galaxy A21s 128GB Black 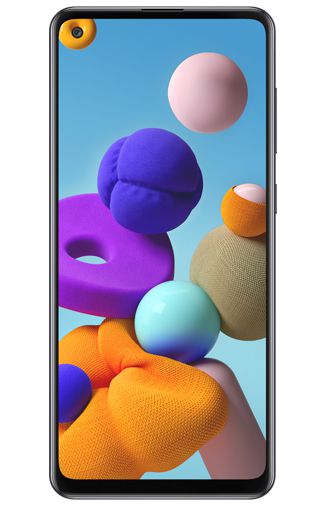