Everything about the Samsung Galaxy S10 128GB G973 Blue

In early 2019, Samsung unveiled the new Galaxy S-line which has many improvements. For this tenth version, the South Korean manufacturer has pulled out all the stops! The Infinity Display now covers even more of the front than before, the front camera is hidden in a punch-hole, and the back of the device features three cameras!

The fingerprint scanner is no longer found on the back, but hidden under the display in the form of an ultrasonic sensor. Under the hood, you'll find a fast chipset and a lot of RAM, so no task is too heavy for this device! The smartphone runs on Android 9 Pie with an added Samsung OneUI skin.

The energy-efficient Dynamic AMOLED display shows every single detail. The 6.1-inch screen provides beautifully sharp images and a colourful display. Individual pixels are switched off for black images, so the contrast is even better and the display consumes less power!

Thin bezels and a punch-hole

Around the Infinity Display, you'll find even thinner bezels than on its predecessors. The top of the display features a punch-hole for the front camera. This is a creative solution that gives the screen even more space. On top of that, the bezels are slightly rounded and that looks very premium!

The blue S10 comes fitted with a glass back and rounded sides, making the device very comfortable to hold. The glass panels are made of tempered glass, which reduces the risk of scratches. The S10 128GB Blue is also water resistant, so you can make calls in the pouring rain!

The fingerprint scanner is hidden under the 6.1-inch display. Competing devices often have an optical sensor, but the S10 comes fitted with an ultrasonic version. This scanner uses sound waves to scan your finger, which makes unlocking it fast, easy, and very reliable!

Four cameras, each with their own feature

On the back, the S10 Blue comes equipped with three cameras. You can now capture even more in one picture, or zoom in without losing any details. Filming is done in 4K, and thanks to optical image stabilization (OIS) your film material will never be jerky again!

You can take quick and easy selfies with the front camera. This sensor now has a wider angle, which is very useful for group pictures. You can also add effects like bokeh with the smart software. This effect gives your picture a little more depth by blurring the background.

OneUI based on Android

The Samsung Galaxy S10 128GB G973 Duos Blue runs on Android 9 Pie. The South Korean manufacturer has added their own OneUI-skin to the Android operating system. This skin provides a user-friendly interface. You can immediately get started with various Google apps, and the App Store is waiting for you with millions of apps and games to choose from!

Processor with a lot of computing power

With the Exynos 9820 processor, playing heavy games like PUBG is no problem. This energy-efficient chip provides a lot of computing power. Next to that, the S10 has 8GB of RAM, which means this device has no problems multitasking!

The 3400mAh battery provides the Galaxy S10 with power. The display and the energy-efficient processor don't need a lot of power, so you can easily get through the day on one battery charge! You can quickly charge the battery via cable, or wirelessly by placing your device on a Wireless Charging station! 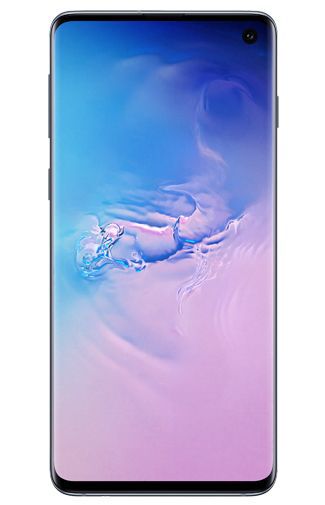