Everything about the Samsung Galaxy Z Fold 3 512GB Black

Samsung presented the updated Z Fold series, including this Samsung Galaxy Z Fold 3 512GB Black, at the Unpacked event in August 2021. This phone serves as the successor to the Z Fold 2 and has received a number of good upgrades, such as a certificate for waterproofness.

When a message comes in or you want to check the weather, you can use the Z Fold 3 just like a traditional phone. For these tasks, there is a 6.2-inch AMOLED screen on the front, which has a refresh rate of 120Hz so that images pass by smoothly.

When you want to multitask or watch a video, unfold the phone and use the huge 7.6-inch AMOLED screen on the inside. The screen has a 120Hz refresh rate, just like the outer screen, so images look smooth here too.

This Galaxy Z Fold 3 is equipped with the powerful Snapdragon 888 chipset. This allows you to really run all the apps and games on the Z Fold 3 without it becoming slow. Thanks to the 12GB of RAM, multitasking is not a problem either; you can do this even more easily with an S-Pen.

This Z Fold 3 has no less than five cameras, which are distributed over three places on the phone. On the rear, there are three cameras, including a telephoto lens that can zoom in 2x without loss of quality. There is also a main lens and an ultra-wide-angle lens.

The Samsung Galaxy Z Fold 3 has a battery with a capacity of 4400mAh. You charge this battery quickly via a fast charger, or you choose to charge it wirelessly with a QI charger. With reverse wireless charging, you can even charge other devices wirelessly using your Z Fold 3 as a charger!

Samsung has been providing more and more phones with a waterproofness certificate in recent years, but this is the first foldable phone to receive such a certificate. Thanks to the solid housing, hardened glass and water resistance, this phone can definitely take a hit!

The Samsung Galaxy Z Fold 3 512GB Black does not come with a charger. Check whether you have a compatible charger at home. Or order a charger. 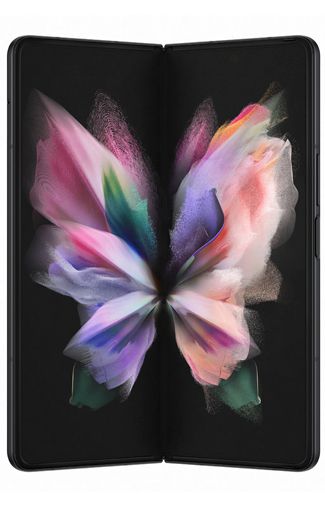